Take That is one of my favourite bands. I have loved them for as long as I can remember! I have memories of me singing ‘Wash your Back’ along to ‘Back For Good’ as I genuinely thought that they were the lyrics! I can be let off as I was only a small child at the time!

The boys’ journey has been a huge rollercoaster, obviously starting with five members until Robbie quit. This led to them breaking up, which caused broken hearts around around the world and a hotline being set up for devastated fans.

Just shy of ten years later, four out of five members reunited and their fans were overjoyed. Take That have grown even more successful and have transformed from boyband to manband. There have still been surprises and bumps along the way. All five members did an album and a tour in 2011 and before their next album, Jason quit the band.

Gary Barlow, Mark Owen and Howard Donald are what’s left of Take That, but they have shown that they are just as good (even better) with the three of them!

I’ve been lucky to see Take That live several times and when they announced their Wonderland tour, it was just a given that we would be going in my house.

When the tickets went on sale, everyone had some sort of device ready to get tickets since they sell out in record times. Luckily we got our tickets and we were going to see Take That on the 11th June at the O2.

As time moved closer towards that date, we had the horrific Manchester Arena attack, which shocked the world. It made people feel worried about going to concerts and heartbroken that someone would target a place where children were. We then had the London Bridge attack, the night before the ‘One Love Manchester’ concert.

Watching that concert was so heartwarming as you saw all the artists, including Take That and Ariana Grande, standing together, victims from the concert attending, the message of love being spread and the attitude that we were not going to let these terrorists win.

One week later, my family and I headed to the O2 in North Greenwich. We had had a few people shocked that we were still attending, but I knew that there would be more security, more bag checks and quite frankly, I was looking forward to see this band since I booked the tickets. I wasn’t going to be put off!

At North Greenwich tube station, there were the signs done by allontheboard, using Take That songs to make puns. I love these signs! 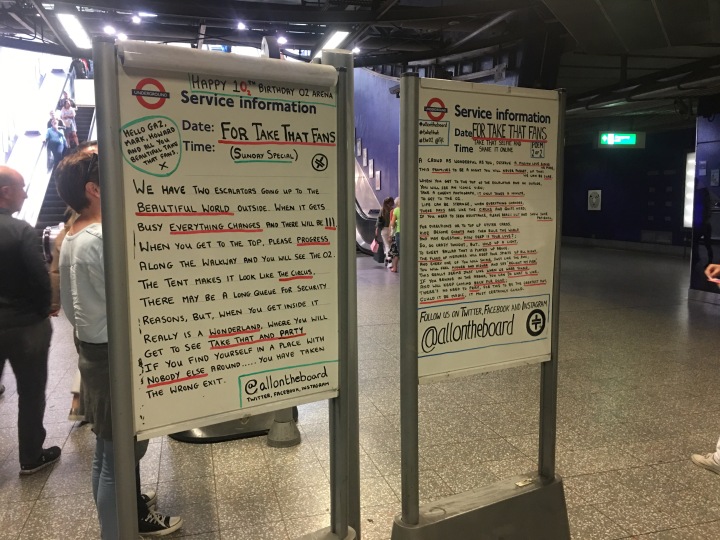 The queues in the arena were enormous due to the amount of security, but no one was moaning about it. A few people did try to get in with bags in the no bags section, but were sent swiftly away.

Once inside, I bought the programme as I do at every concert and we made our way to our seats. We didn’t see the whole of the support act, All Saints, but we caught a few of those songs at the end. 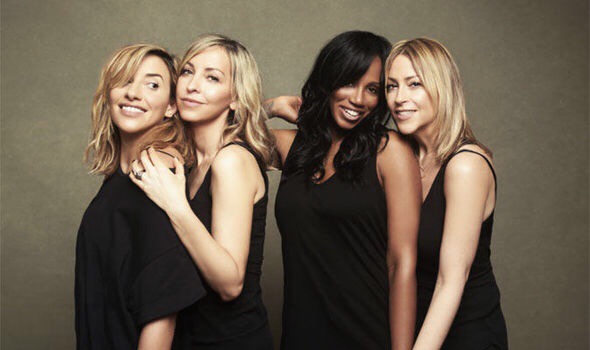 Now it was just a waiting game. Of course this meant a Mexican wave was started! 🙌🏻🙌🏻🙌🏻🙌🏻🙌🏻 My Dad played his usual loveable idiot part when he stood up randomly and did his own Mexican wave, causing everyone around to laugh 😂😂🤦🏼‍♀️

We all guessed that Take That would open with ‘Wonderland’, especially since it was the name of their tour and we were right!

Mark was right by us when the boys came on and started singing. (You can work out where he is in the video, but annoyingly the spotlight is on him!)

​​
Our view was incredible of the stage! In the past, when I’ve been to Take That concerts, there has been the main stage and a B stage. It seemed this time that they decided to make the B stage the main stage, wanting to be in the middle of the crowd.

I have always said that even if you’re not a Take That fan, you would enjoy their concert. They always put on an amazing show, which has something for everyone. I know people who aren’t the biggest fans of the band (I know, shocking!) who have really enjoyed their show and have said that it was the best concert that they’ve been to.

They really get the crowd involved and of course do some of their old songs, knowing how much their fans love them.

I was surprised that they performed “How Deep is Your Love” as I’ve never seen them do that live before.

​​
There was a funny moment when the boys got onto stage, but Gary fell over! Mark tried to help him, but ending up falling over too on top of him! 😂😂😂

They did all my favourites and many more! I loved all the ones from their new album  Wonderland! Be sure to check it out!

​​
Howard came to where Mark had started during the song Cry! 😭😭😭

​​
I love the song Never Forget. It is just so beautiful and it is so true that you should never forget where you have come from. It is always so awesome to see the crowd with their arms in the air during the chorus.

​​
The concert ended with the song Rule The World, with the boys sharing their love for their fans and a reminder to keep safe ❤️❤️❤️ such a beautiful song!

The whole concert was amazing and Take That was brilliant. If you get the chance, go and see them live! You won’t regret it! Or at the very least, listen to their new album!