These tickets were given to me as a surprise Christmas present. I had tried and failed miserably to get them myself, but Christmas Day my mum informed me that she had got tickets after all and had kept it secret for a few months. I was beyond excited and I couldn’t wait for April!

I love Bruno Mars. He is just the definition of cool. Him and his hooligans. Singing, dancing and how they all look just seems to come naturally to them. James Corden notes that if he dressed like that, he’d look like he was having a breakdown on his Carpool Karaoke. 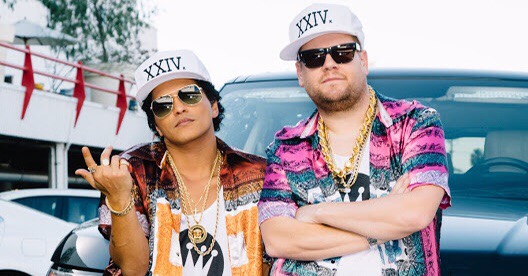 I have loved him ever since he released his first album, as well as singing and writing ‘Billionaire’ and ‘Nothin’ On You’. There are so much songs I love, but Uptown Funk is an absolute tuneeee!

My friend and I stopped off at Westfields in Stratford for some shopping before we headed to the O2. We actually headed to the O2 early to grab some dinner, but restaurants were still saying an hour and twenty minute wait, with another half an hour wait for food. We just got the tube back to Westfields and had to wait five minutes to be seated at Las Iguanas, with food and cocktails being delivered in record times!

When we got the tube back to North Greenwich, we spotted this sign. 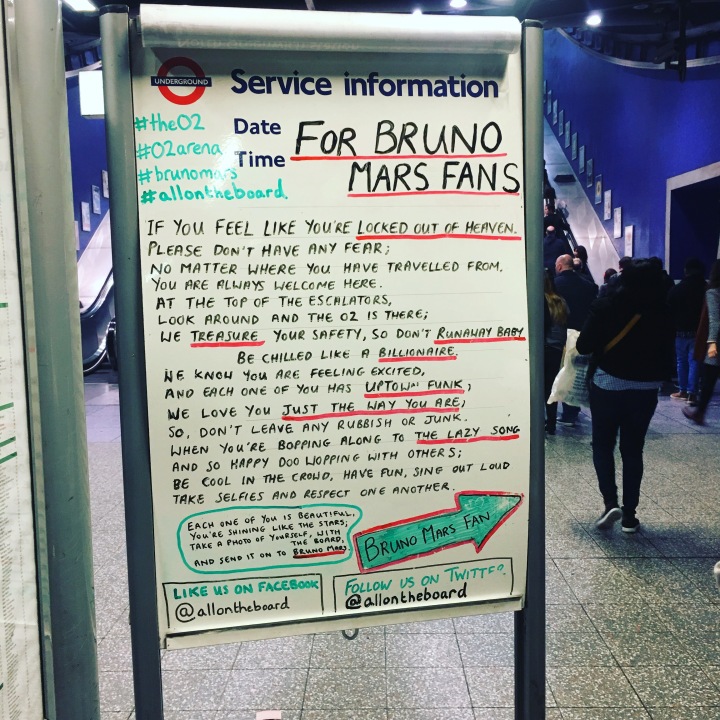 I thought this was incredibly cool and however did this, kudos to you! Loving the puns here!

Once inside the O2, I immediately bought a programme which was £15. I always get them at concerts as they’re a nice little memento. I will admit that this programme seemed to just have pictures of Bruno Mars in it. 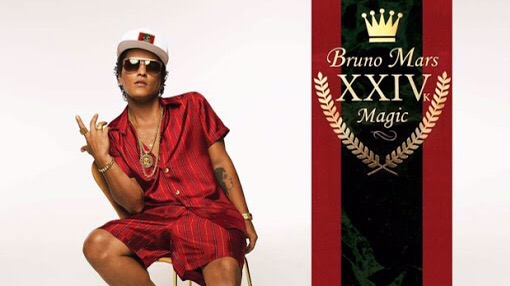 The support act was Anderson Paak and the Free Nationals. I didn’t see too much of them due to us enjoying dinner and drinks at Las Iguanas, but what I saw I enjoyed.

Soon after the stage was prepared for Bruno. We were sitting in the lower tier, on the end of row U, which meant our view of the stage was amazing! Well done Mum for getting such good seats! 😍 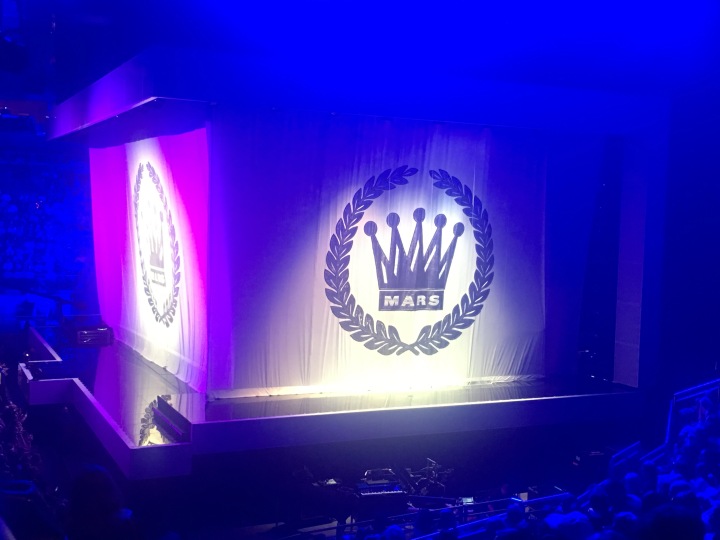 It was roughly quarter to 9 when the arena went dark and the curtain started to lift. It was time for the one and only Bruno Mars!

He opened with the song ‘Finesse’ from his new album and had the crowd already going insane. He was joined by his squad of hooligans and of course, they were busting out their awesome dance moves. 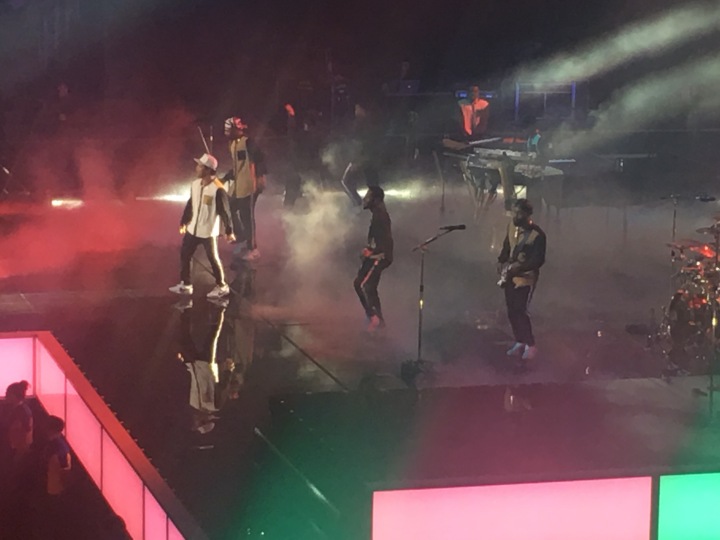 Next he launched in the song the tour is named after: 24K Magic!

​​
The concert was so amazing! Bruno Mars and his hooligans are beyond brilliant! He did all of his songs from his new album and of course he did the majority of his old ones. 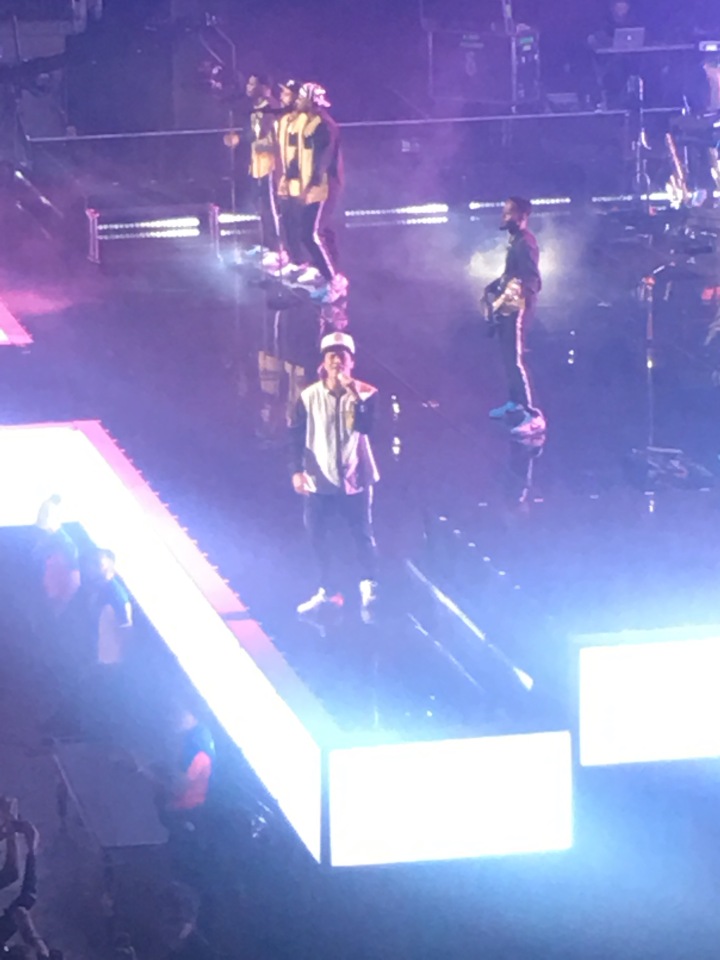 Our seats were so good that it often felt like Bruno Mars was making eye contact with us as he sang! 😍😍 Definitely looks like it from the picture!

He made a few comments about putting the “fucking camera phones” away and he would call out to the crowd when he saw phones out, asking if it would go on their Instagram. When he sang ‘Perm’, he saw that he was being filmed and declared that what he was about to do they would definitely want on their Instagram, before breaking out in a fast-paced, really cool dance with his group.

He did most of the songs from his album 24K Magic, plus his classics. He didn’t do ‘Gorilla’ or ‘The Lazy Song’, but his show was amazing enough!

​​During ‘Runaway Baby’, the lights went down and the music seemed to  get quieter. Of course this was meant to happen as Bruno was telling the crowd to get down and get quiet, ​​before launching into the chorus again.

​​
Bruno “ended” his show with ‘Just the Way You Are’. ❤️❤️❤️ Such a beautiful song! It was so amazing and Bruno led the crowd in a sing along​

​​After that amazing song, the crowd cheered and stomped their feet for more.

It wasn’t long before Bruno Mars and the hooligans came back with a bang!​

​​​The encore was Locked out of Heaven and Uptown Funk! Beyond fantastic! They’re some of my favourite songs and it was great to see them live!

​​
Oh what a night! I definitely recommend seeing Mr Mars and his hooligans live!